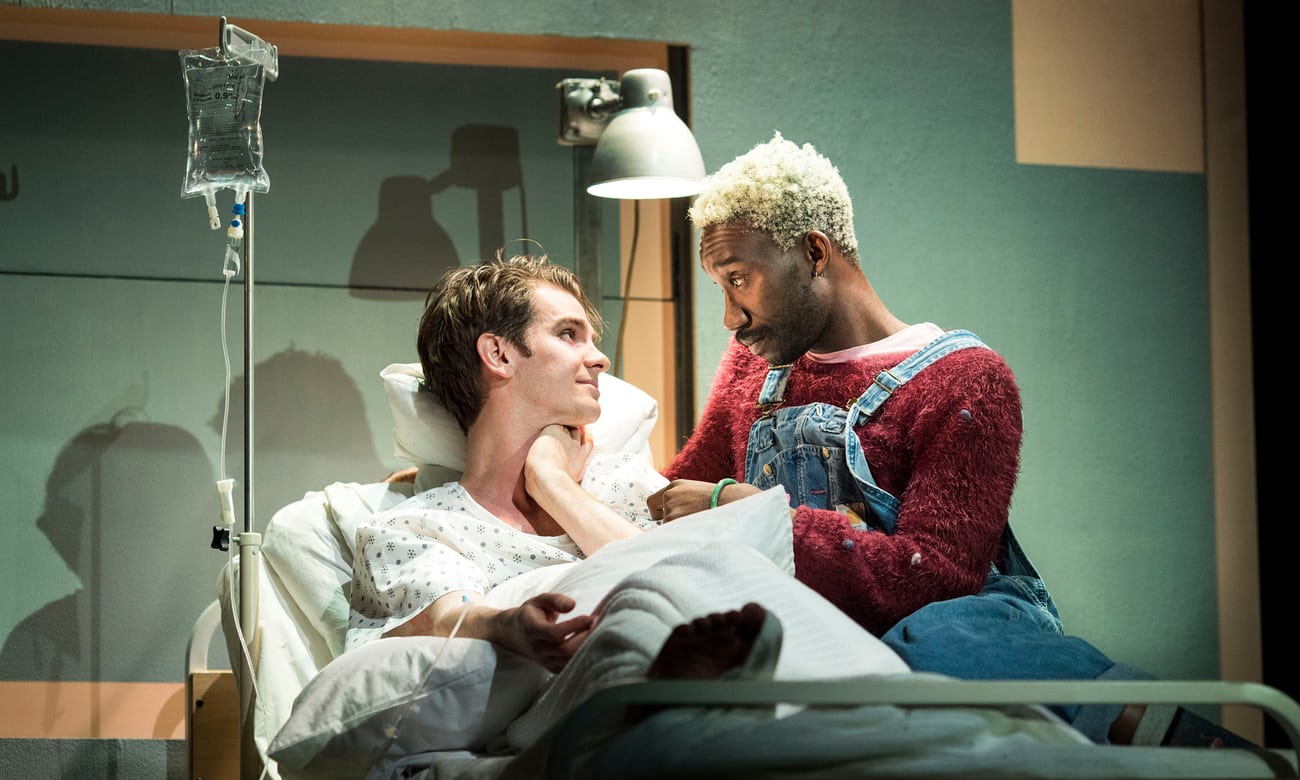 Going to see these shows as part of the National Theatre Live scheme allowed me to be part of one of the most talked about experiences of the summer. Angels In America by Tony Kushner and directed my Marianne Elliot has been the plays of the summer to go see, they detail the AIDs epidemic in 1980’s America. On a whole I thoroughly enjoyed both part one, Millennium Approaches, and part two, Perestroika, however some elements did not fully live up the hype that has been created.

Shall we start with the disappointing elements so we can quickly move onto the brilliant? Andrew Garfield playing Prior Walter was one of the most hyped characters in the play, and a major draw for audiences. I am a fan of Garfield from his film work and so was excited how he would fit on the stage. However the melodramatic and exaggerated characterisation of Prior Walter did not work for me. I understand that the character is one of excess however at times this became too excessive. Being so overtly camp and frankly loud made me empathise less with the hardships the character faces. I also undermined some of the more subtle and quiet acting going on during the split stage sequences. One good point about Garfield’s interpretation of the character was that in the large and ever-changing stage he was never lost and always drew the eye of the audience. But I fully believe that Garfield in this play appeals to a lot of people and my opinions is exactly that and not a measure of his acting ability whatsoever.

Moving on to the elements of the show I thoroughly enjoyed, Russell Tovey another actor I was already aware of before seeing the show is outstanding. Playing Joe Pitt a character that is coming to terms with his sexuality in light of his religion, Tovey allows real empathy for the audience. His characters subtle and understated moments really ground the play in the confusion that can be combined with sexuality. The other roles Tovey plays as part of the ensemble are light-hearted and comic ensuring a complete difference to his main role. The same can be said of other standout actors throughout the plays such as James McArdle who’s Louis Ironson is perfectly flawed to create a love hate relationship with the audience, and Nathan Stewart-Jarret who brings the fabulous Belize to life with sass and immense presence.

One other aspect of the shows that must be talked about is the staging. Millennium Approaches in particular featured incredible revolving set pieces; these allow different areas of the stage to become certain separate locations or to link together to create one large space. The moving aspect of this is so seamlessly executed sometimes it is not even noticeable until the stage has changed entirely. Ian MacNeil the designer behind this created minimalism to combat the complex ideas being brought forward by the text.

All in all this is a very good play, being extremely important throughout the current political climate in which all areas of the LGBT+ community are under scrutiny in America. I would recommend going to see it live if you can or going to the second screening held by the National Theatre, part one showing on the 8th of august at select locations. However when compared to the rest of the shows out there this summer the frenzy surrounding some aspects of this play is undue.